Posted by MikeWileyProductions in Uncategorized on October 11, 2016 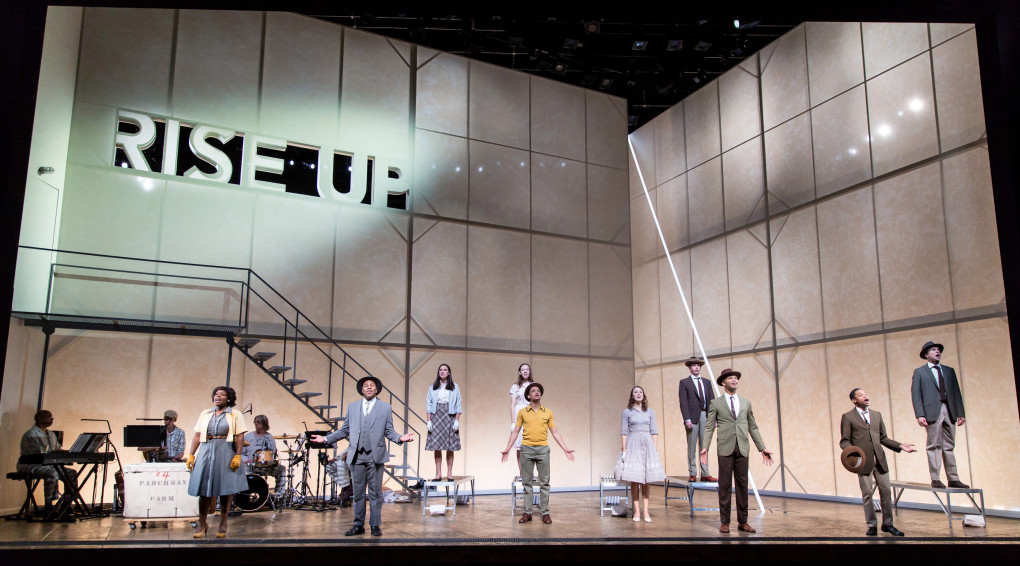 The cast of “The Parchman Hour” at the Guthrie Theater. (Photo by Dan Norman)

By DOMINIC P. PAPATOLA / SPECIAL TO THE PIONEER PRESS

At first glance, there is a kind of sterility about the Guthrie Theater’s production of “The Parchman Hour.” The flat, angled, imposing, off-white surfaces — with the imperative phrase RISE UP chiseled in — make Clint Ramos’ design look more like an exhibit at the Walker Art Center than a stage set. When the dozen-member cast lines the aisles of the McGuire Proscenium to begin the show, you can almost feel the earnest agitprop radiating from the performers.

And this is why you don’t trust first impressions.

It takes only a few minutes for this play-with-music about the young Freedom Riders who risked their lives to advance the cause of civil rights in the 1960s to capture your attention. By the end, their stories, their sacrifice and their determination capture your heart and fire your spirit.

The show takes its name from the variety shows the young activists put on while imprisoned in the Mississippi State Penitentiary, also known as Parchman Farm. Those divertissements included songs and stories and borrowings from the popular culture of the day. “The Parchman Hour’s” re-imagining includes satirized commercials, a nod to “Rowan & Martin’s Laugh-In” and music from old spirituals to Bob Dylan.

There’s a wry transgressiveness in Mike Wiley’s script, which ventures outside the penitentiary walls to depict the broader context and impact of the rides, including mob violence against the riders in Alabama. Each of the actors takes a share of the play’s narration and plays a number of different roles. Women play male characters, and men depict females. White actors assume the persona of black characters and vice versa.

Too, this is a dimensional and nuanced look at a movement. Visceral disagreements about means versus ends are explored, mainly through clashes between nonviolence disciple John Lewis and the more tart-tongued, conflict-ready Stokely Carmichael. Martin Luther King’s decision not to participate in the rides is also litigated among the inmates.

So much history and so many storytelling styles invite pixilation, but director Patricia McGregor’s production — which is filled with projected images of the real-life Freedom Riders and other heroes and villains of the struggle — offers clear, potent, thoroughly human images of these consistently brave and frequently terrified young people. While the show is a serious examination of a group of people and an ugly period in American history, it’s judiciously leavened with laughter and light moments.

Jared Joseph and Kory LaQuess Pullam articulate the differing philosophies of the Freedom Riders with heart and humor as Lewis and Carmichael. An imposing Stephen Conrad Moore displays both the privilege and the moral peril of being a black “trustee” in a Southern prison … and contributes a haunting version of Dylan’s “The Times They Are a-Changin’.”

In a uniformly strong-voiced cast (backed by music director Sanford Moore’s tight onstage quartet) Zonya Love rattles the rafters and comes close to stopping the show at the end of the first act with a soul-stirring version of the old spiritual “Lord Remember Me.”

“The Parchman Hour” is a lesson in civics and a linkage to current events well worth experiencing (though parents wondering about age-appropriateness should note that the show includes a couple minutes of dimly lit, nonsexual nudity). Its lessons and its messages are urgent, relevant and — sadly — still crucially necessary.

What: “The Parchman Hour”
When: Through Nov. 6
Where: Guthrie Theatre, 818 Second St., Minneapolis
Tickets: $67-$34
Information: 612-377-2224 or guthrietheater.org
Capsule: A stirring reading of an important chapter in the civil rights movement.