Posted by MikeWileyProductions in News on January 17, 2017

The accent was on both the past and the future Monday when about 1,300 people gathered at the Charlotte Convention Center for the McCrorey YMCA’s 23rd annual Martin Luther King holiday breakfast. North Carolina-based actor-playwright-director Mike Wiley took the crowd back to 1961, with “Breach of Peace,” a powerful one-man show about Freedom Riders. These black and white civil rights activists rode interstate buses into the segregated South. Along the way – including during stops in Charlotte and Rock Hill, S.C. – they were threatened, insulted, savagely beaten and finally arrested. Undeterred, they pressed on. 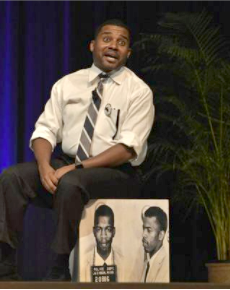 “We have a duty to follow their path,” Wiley said after his performance in which he portrayed civil rights heroes like John Lewis and infamous racists like Birmingham public safety commissioner Bull Connor. “It’s not about tweeting, it’s not about ‘liking.’ It’s about doing.” Those who attended the breakfast also heard from newly inaugurated North Carolina Gov. Roy Cooper. He urged them to get more involved and vocal in the next few years in supporting his fight to expand health care, improve education, create good-paying jobs, end discrimination and lift up the working poor. Cooper then quoted King – whose federal holiday was observed Monday – on the need to stand up and speak out for what is right. “Dr. King said, ‘In the end, we will not remember the words of our enemies, but the silence of our friends,’ ” the Democratic governor said. “Do not remain silent, friends. Your state needs you.”