Posted by MikeWileyProductions in Review on October 29, 2011

The Parchman Hour: World Premiere of Recent History at PlayMakers

On John Mayall’s 1966 seminal Lp Bluesbreakers, featuring the 21 year-old Eric Clapton, there was a song called “Parchman Farm.” Despite being a great blues song, it is doubtful that many of us knew what the title referred to or what it meant to the civil rights movements of the 1960s. Officially, it was the Mississippi State Penitentiary, but for the first wave of Freedom Riders in the summer of 1961, Parchman was hell on earth. In celebration of the 50th anniversary of the first Freedom Ride, PlayMakers Repertory Company is presenting the world premiere of The Parchman Hour, written and directed by Mike Wiley. Actually, this production is the professional realization of a previous joint student production by the Department of Dramatic Art at UNC-Chapel Hill and the Center for Documentary Studies at Duke.

The cover of the program summarizes what this production is all about: “Songs and Stories of the ’61 Freedom Riders” and “Freedom Does Not Drop From the Sky.” Nowhere is it labeled as a “musical,” perhaps to not trivialize the subject matter, although music and dance predominate throughout the show. The stage is bare, except for a small shack at the back where four musicians, clad in striped prison uniforms, supply a superbly authentic live blues band. To the right and raised above the stage is a large segmented screen that provides actual documentary footage of the staged events. It is on that screen that the evening begins – with a white-bread, sanitized version – visually and musically – of America, circa 1960. Everyone is happy, attractive and free to travel throughout this great land – if you are white. 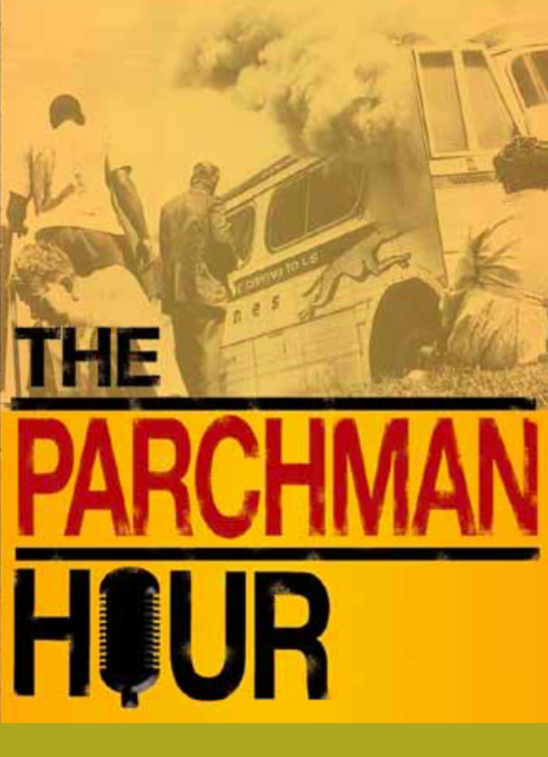 On May 4, 1961, the first Freedom Ride of thirteen black and white citizens set out from Washington D.C. on buses to assert the right of all races to travel together freely anywhere in the U.S. The hostility and beatings they endured and their incarceration and eventual release after 39 days in Parchman Farm is told with an exhilarating mix of song, dance, archival clips, humor, education, and some surprising revelations – at least to me. This is an ensemble tour de force, with the thirteen performers representing the freedom riders on stage nearly all the time. Each performer represents one rider and sometimes several other characters without regard to race or sex. Some of the names are familiar, like John Lewis, current congressman from Georgia, and Stokely Carmichael, leader of the Student Nonviolent Coordinating Committee (SNCC) who was later said to have originated and championed the term “Black Power.”  Kashif Powell played Stokely; he was the most powerful presence of a uniformly excellent ensemble (perhaps because he was always at the front of the stage). Doug Bynum played John Lewis. It was these two characters who throughout the play engaged in one of the central – and still ongoing – debates in nearly every great movement: nonviolent civil disobedience protests as exemplified by Gandhi vs. a more militant approach.

The Parchman Houris is far more than merely a dry, preachy, guilt-inducing diatribe. In the midst of this historically accurate presentation of the events surrounding these birth pangs of the civil rights movement is a wonderfully entertaining show. More remarkable is that it is done in a way that does nothing to diminish the gravitas of the subject matter. The live band is smokin’; and, especially considering the limited stage area, the choreography by Aya Shabu is simultaneously imaginative and authentic. There was a feeling of natural spontaneity as opposed to rehearsed movement. In a way, this can be described as sort of an old-time variety show, the kind that used to pervade TV. Part of this was because the prisoners in Parchman actually did create songs and skits during their stay to remain sane.

Like the Nazis, who used some Jews as enforcers in the camps against their own people, Parchman Farm used some of the African-American prisoners to beat their fellow detainees. In one of the most profound scenes, we see the enormous prisoner “Pee Wee” literally rise from a door in the center of the stage to beat a freedom rider who has “misbehaved.” He is played by David Aron Damane, and we are all treated to this man’s magnificent voice. His slowed-down rendition of Bob Dylan’s “The Times They Are A-Changin'” near the end elicited tears and goose bumps throughout the audience. One of the funnier moments was the very petite but dynamite Kelsey Didion (who also sang some great numbers) portraying Bull Connor, the epitome of white, redneck, southern sheriffs who became the symbols of bigotry.

The Parchman Hour spares no one and endeavors to entertain within the confines of truth. Thus I was a bit confused during the early part of the play when the freedom riders would bow in mock deference and proclaim, with obvious sarcasm, “hail king” when Martin Luther King, Jr., was mentioned. King offered moral and financial support but did not physically take part in any of the freedom rides, and there was a very pointed scene later on that dealt with this issue. Both President and Bobby Kennedy, as well as most white Christian church denominations, did not fare too well either.

Finally, on this opening night, the representation of recent history met reality with profound results. Before the play began, it was announced by artistic director Joseph Haj that in the audience was Joseph Charles Jones, a freedom rider from Atlanta to Montgomery on May 24-25, 1961. During the final rousing, joyous and hopeful number, Jones joined the cast on stage. He hugged and danced with every member of the ensemble and there was not a dry eye in the house by the end.