Posted by MikeWileyProductions in Uncategorized on October 10, 2016 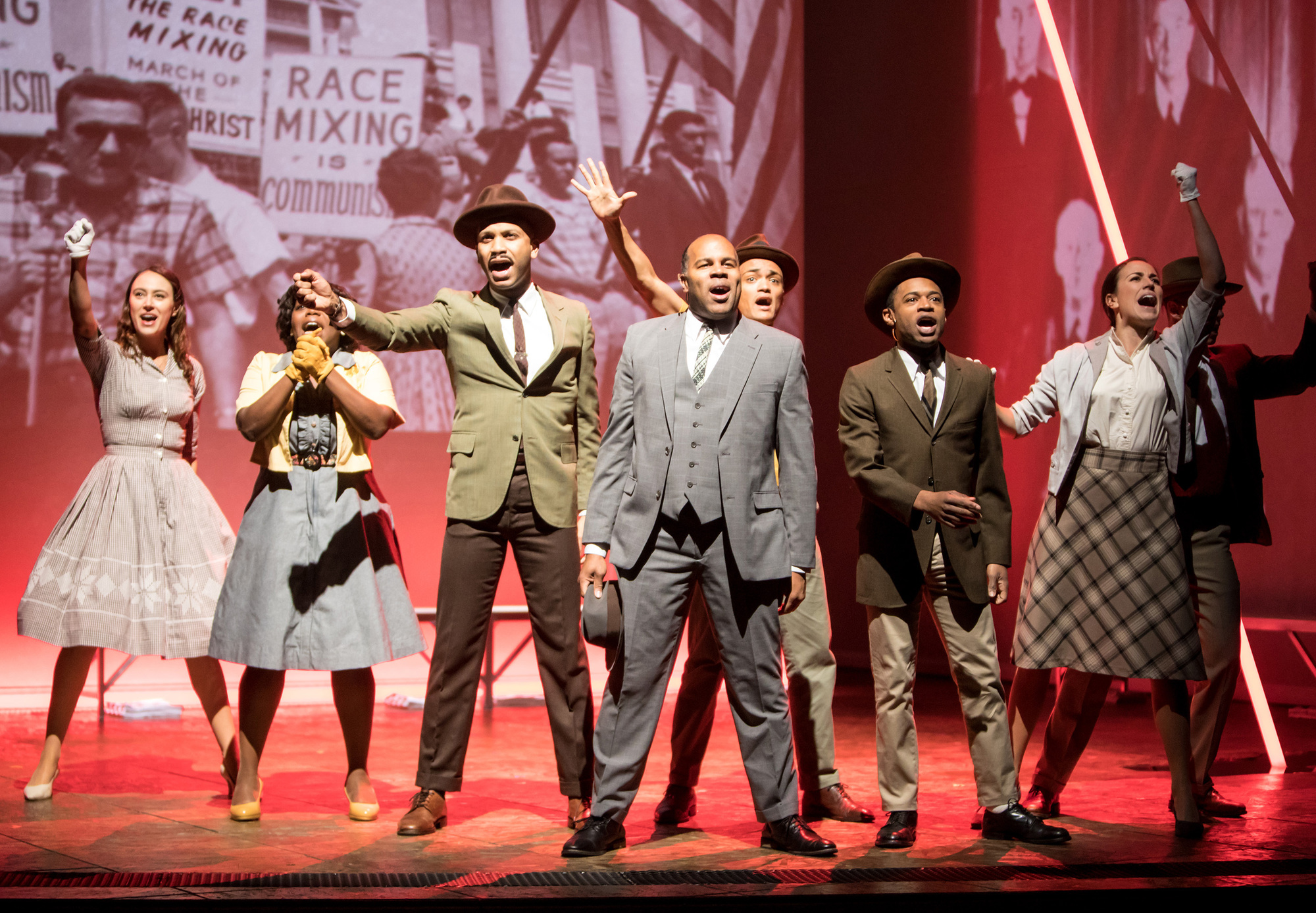 The cast of the Guthrie Theater’s The Parchman Hour, written by Mike Wiley and directed by Patricia McGregor. Scenic design by Clint Ramos, costume design by Katherine O’Neill, lighting design by Jiyoun Chang and projection design by Tom Mays. October 1 – November 6, 2016 on the McGuire Proscenium Stage at the Guthrie Theater, Minneapolis. Photo by Dan Norman.

By the usual standards of theater, Mike Wiley’s “The Parchman Hour,” which opened Friday at the Guthrie, is powerful and moving. Director Patricia McGregor sweeps us up in her vivid depiction of this story of Freedom Riders who helped desegregate interstate transportation in the South. Her staging of the violence that they met is more implied than actual, so that we fill in the horror with our imaginations. She also touchingly frames the protesters’ resolve as they nonviolently sought to make America a just and beloved community.

The nits in “Parchman,” and there are a few, are swept away by the end, when the show becomes transcendent. Stirringly, and in clap-along song, the show’s climax ties the historical struggle to the current campaign to show that black lives matter. McGregor’s skillful guidance of the narrative transforms “Parchman” from a work of theater into an inspiring sermon that charges us to act.

“Parchman” is named for a notorious Mississippi prison where an interracial group of Freedom Riders was jailed in 1961. There, stripped of everything, including their clothes (there’s some artful nudity in the production), the protesters put on a variety radio show to pass the time and to keep their spirits up. The prisoners, including historical figures James Farmer (Kevin Free), John Lewis (Jared Joseph), Stokely Carmichael (Kory LaQuess Pullam), Freddie Leonard (Nathan Barlow) and Carol Silver (Cat Brindisi) — sing, act out commercials and play games.

We also see them interact with the authorities, including mean Deputy Tyson (Terry Hempleman) and his inmate henchman, Pee-Wee (Stephen Conrad Moore), who is unwillingly caught up in systems of violence.

McGregor’s production benefits from Tom Mays’ video projections and Clint Ramos’ evocative scenic design, which suggests both protest posters and the artwork of Jacob Lawrence. Arranger and composer Sanford Moore leads the band that gives the show its pulse.

The “Parchman” cast delivers with gusto and aplomb. Standouts include Free as the irrepressible Farmer, Pullam as the fiery Carmichael, Brindisi as fearless Silver and Zonya Love, who plays the help, Pearl, among other characters. Love has a deep, soulful contralto that radiates power and some pain. She brought the house down on opening night. 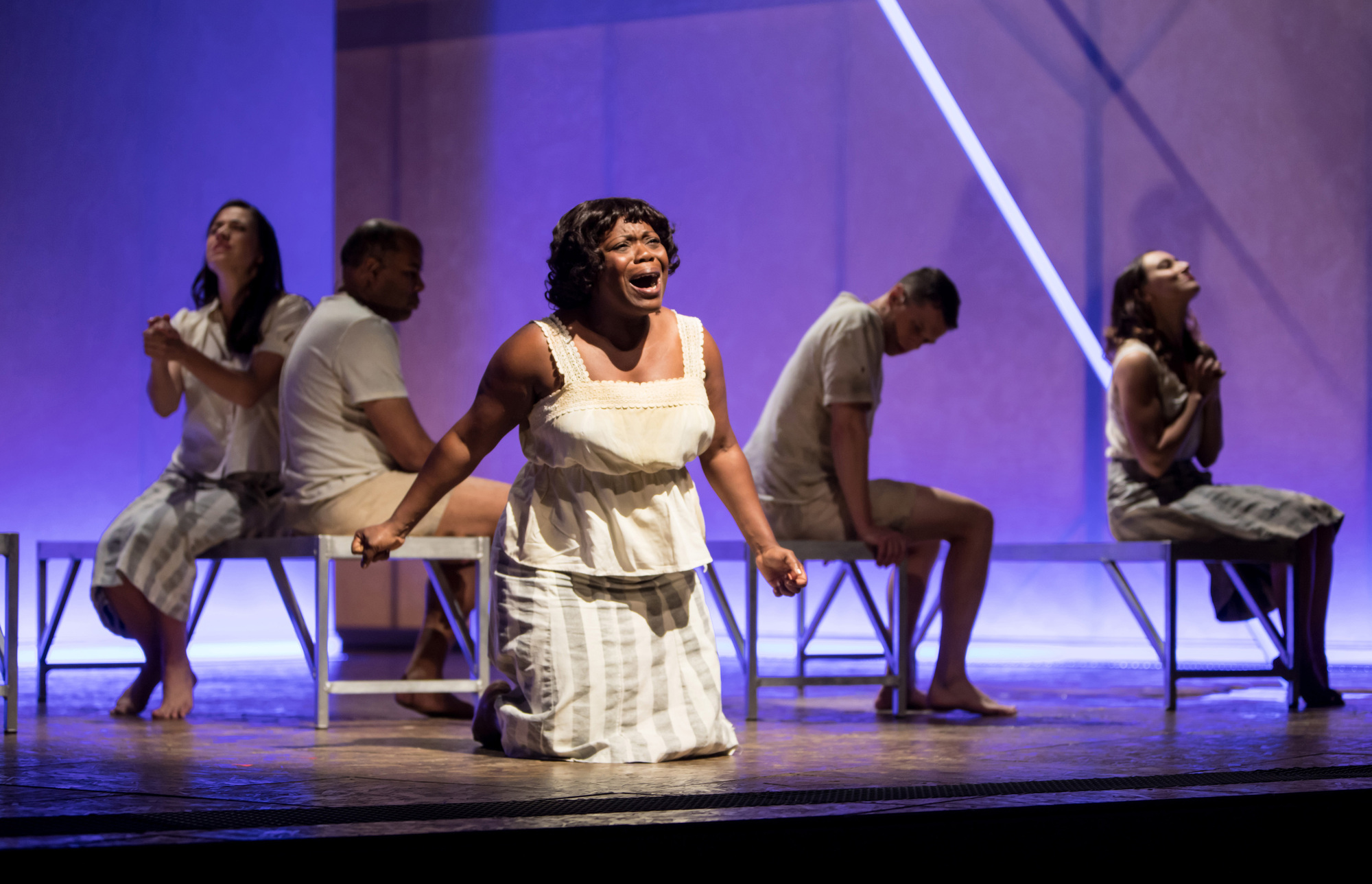 Love is the only black woman onstage, and thus shoulders a burden of representation. Actually, “Parchman” scrambles our emotions because of some unusual casting choices. Black actors, including Barlow, play white perpetrators. White actors, including David Darrow, play black sympathetic figures. Women play men and vice versa. We expect a Bull Connor to be a barking white man instead of a dignified woman.

Wiley introduces the characters by name and age throughout the show as their images flash on-screen behind the actors. The practice started to seem clunky as the show wore on, even though the intros do not take up any more time. But such roll calls find their power at the end, when the historic figures get connected to Tamir Rice, Sandra Bland and Mike Brown, among many others. It’s a gesture of the power of theater and of hope in a historical moment.